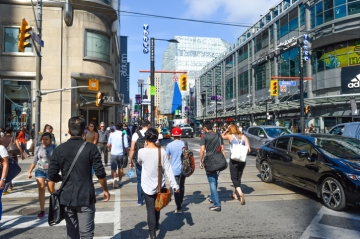 First reports of Canada’s 2016 census reveal that two-thirds of Canada’s population growth between 2011 and 2016 can be attributed to immigration. Because the Canadian census is conducted every five years, this data provides valuable new insight into statistics that have changed significantly since 2011.

While full data on immigration statistics is not scheduled to be released until October, this first release of data shows that immigration is a vital factor in Canada’s population growth, and consequently, its economic growth.

The territory of Nunavut saw the greatest percentage of population growth, at 12.7 percent. Alberta follows close behind with a growth of 11.6 percent, and all the western provinces saw growth rates higher than the national average. New Brunswick is the only province that has seen a decline in its population, at a rate of -0.5 percent. Also notable is the 5.8 percent growth rate in Manitoba. This is the first time in 80 years that Manitoba’s population increase was greater than the national average.

This has been the case in Canada since the late 1990s. In every year since 1999, population growth from immigration has exceeded that from natural increase. Statistics Canada, the country’s national statistical agency that operates the census, predicts that “without a sustained level of immigration, Canada’s population growth could be close to zero within 20 years.”

A report from the Conference Board of Canada, released in October 2016, projected that Canada would need to increase its immigration levels to receive 413,000 newcomers per year by 2030 in order to strengthen the country’s economic growth, and respond to the aging population. The report highlighted the benefits of population growth through economic immigration, as young, skilled workers enter directly into the workforce and begin contributing to Canadian society. Other projections estimate that immigration may account for Canada’s entire population growth by the year 2050.

More recently, in January 2017, a report financed by Immigration, Refugees and Citizenship Canada (IRCC) projected that up to 30 percent of Canada’s population could be immigrants by the year 2036.

“This latest data confirms what previous reports have projected — that immigration is vital to our growth as an economy and as a country,” says Attorney David Cohen.

“We look forward to the release of further valuable data about the characteristics of Canada’s immigration scene. Newcomers to Canada make up an increasingly significant portion of our population, so of course it follows that they make a significant contribution to the Canadian economy and society. With the detailed statistics collected through the census, we hope that policymakers and government officials can continue to operate an active and relevant immigration system.” An overview of Canada’s PNP immigration results for July 2021 The following is a monthly summary of PNP activity across Canada, provided to you by CIC News.