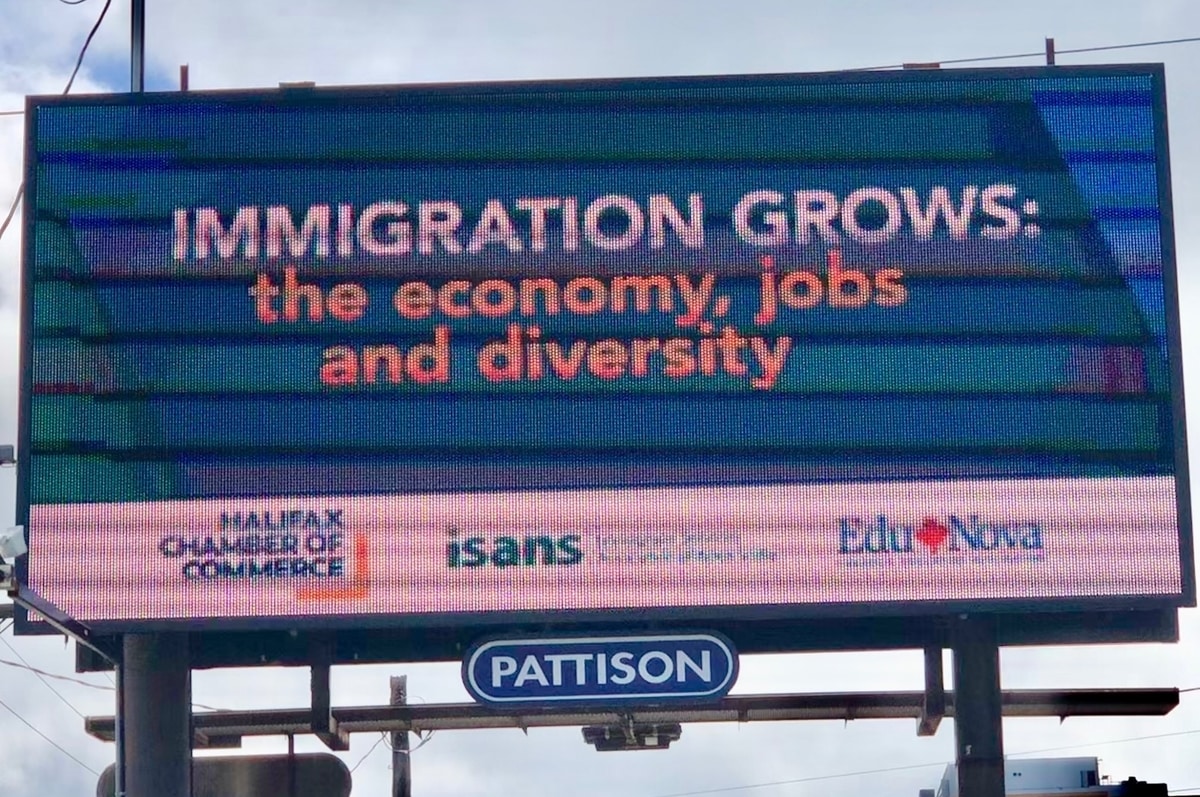 New billboards around Halifax, Nova Scotia, are touting the benefits of immigration and international students in a bid to “get the facts out and set the record straight,” the city’s chamber of commerce says.

Those ads were promptly removed by the company that owns the signs in response to what it called “overwhelming” public criticism.

The nine digital billboards that appeared this week are co-sponsored by the Halifax Chamber of Commerce, the Immigrant Services Association of Nova Scotia and EduNova, a provincial association of education and training providers.

‘We need people to come to Nova Scotia’

Patrick Sullivan, president and CEO of the Halifax Chamber of Commerce, told CIC News that the new billboards weren’t necessarily a response to the earlier anti-immigration ads, which he deemed “false advertising.”

“There is no ‘mass immigration’ to Canada,” he said.

Sullivan said immigration is essential to the economies of Halifax and Nova Scotia and the Halifax Chamber of Commerce has supported it for “well over” a decade.

The billboards are an extension of that ongoing strategy.

Nova Scotia’s population is ageing, Sullivan noted, and immigration is needed to ensure employers in the province have the employees they require to stay in business and contribute to the economy.

“We need new people to come to Nova Scotia,” he said. “We’re enthusiastic about welcoming them and we see it as a problem for the economy if they don’t.” The public response to the new billboards has been “overwhelmingly positive,” Sullivan said, noting that was not the case for the earlier anti-immigration ads.

“We’ve had a lot of folks congratulate us,” he said. “We’ve had very positive responses from the majority of folks.”

Sullivan spoke to CIC News from the sidelines of an event at the Canadian Museum of Immigration, known as Pier 21.

The building housing the museum is located at Halifax Habour and was previously a processing centre for immigrants arriving by ship from Europe.

“Hundreds of thousands if not millions of Canadians can trace their lineage to Pier 21,” Sullivan noted, “so it seems like an appropriate place to talk about the positive benefits of immigration.”

Raising immigration to Nova Scotia is a key focus of the province’s government, which considers it crucial to revitalizing communities and filling persistent labour gaps.

Last year those efforts resulted in a record 5,970 new permanent residents to Nova Scotia, which the province’s Office of Immigration says it is likely to surpass this year.