The Canadian Minister of Immigration, Jason Kenney, has presented the Annual Report on Immigration to Parliament. In this report, Citizenship and Immigration Canada (CIC) examined immigration levels for 2012 and set goals for the upcoming fiscal year. The goals laid out in this report will play an important role in shaping Canada’s immigration policies on both local and national levels.

Overall immigration to Canada is expected to remain stable, with between 240,000 and 265,000 new Permanent Resident visas to be issued in the upcoming year. 2013 will be the seventh consecutive year that immigration targets are set at this level. This ensures that Canada will maintain its place once more as the G8 country with the highest level of immigration.

The following chart outlines CIC’s targets for the 2013 fiscal year. Note that these figures are for visa issuance, not numbers of applications accepted for review: 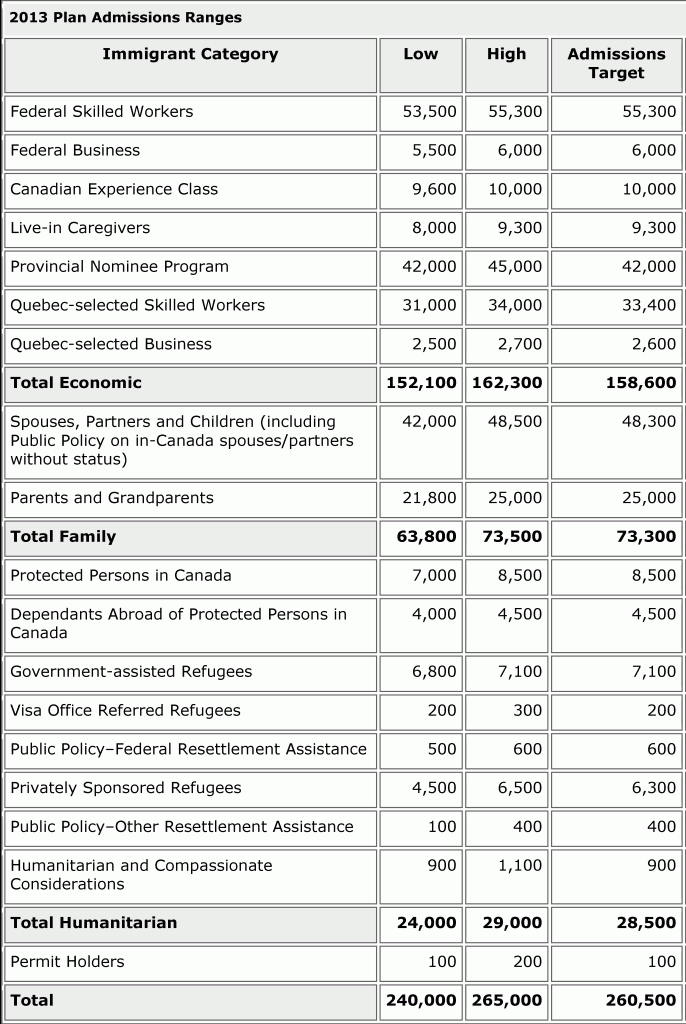 Although overall immigration goals will remain the same, intake goals for some specific programs have been adjusted. Most notably, quotas for the Canadian Experience Class (CEC) have been raised from 6,000-7,000 in 2012 to 10,000 for the upcoming year. This has been done in an effort to better assist foreign students and workers already residing in Canada who wish to pursue Canadian Permanent Residency.

The popular Federal Skilled Class (FSWC) will experience slight changes in its immigration target for 2013. This year, the program is expected to issue between 55,000 and 57,000 Permanent Resident visas. The goal for 2013 has been lowered slightly, with a desired range of between 53,500 and 55,300 visas. Despite this slight change, the program will remain the largest Permanent Residency path to Canada.

Given that the FSWC will issue fewer visas next year, potential applicants may face a tighter race to submit their applications in a timely fashion. According to Attorney David Cohen, some individuals have already begun preparing in advance to ensure that their applications are submitted quickly when the 2013 intake cycle begins.

The Quebec Skilled Worker (QSW) Program will maintain its target goals for 2013. It is the third largest program for Canadian Permanent Residency, after the FSW and the combined Provincial Nominee Programs. The QSW program is currently open and accepting applications from individuals with experience in one of 110 areas of training/fields of study.

The government has already unveiled many changes to the FSWC that are expected to come into force on January 1st, 2013. The new points system for the FSWC was announced in the Canada Gazette in August 2012. As of now, the following components will be required in an FSWC application:

Some aspects of the FSWC program have yet to be announced. These include the following:

While not a complete picture, the Annual Report to Parliament on Immigration nevertheless sets a tone for immigration in both 2013 and the years to follow. Moving forward, CIC has taken care to make sure this tone is clear: immigrants are, as always, welcome in Canada.

To find out whether you are eligible for the FSWC, QSW, or any of the over 60 Canadian immigration programs, please fill out a free online assessment.