Since the Express Entry selection system for immigration to Canada was first introduced in January, 2015, candidates have speculated about the make-up of the pool, but no candidate ever fully knew its structure. Now, since the recent publication of an enlightening Express Entry report, the inner workings of the Comprehensive Ranking System (CRS) can be revealed.

Through the report, we learned the following: 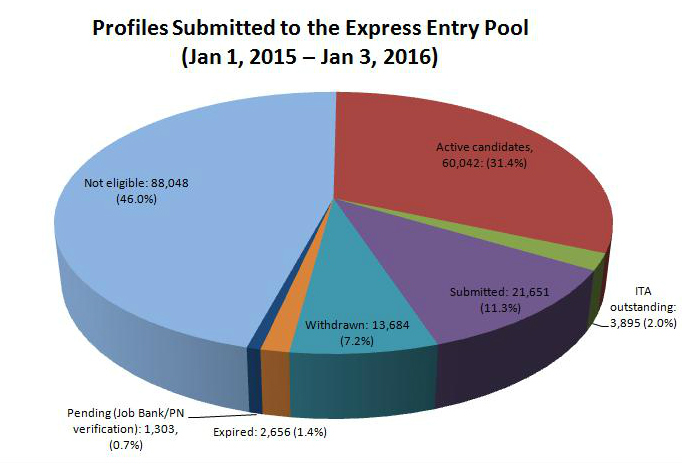 Active candidates in the Express Entry pool have the opportunity to increase their likelihood of receiving an ITA by improving their CRS score. This can be done by:

In addition, candidates may:

Candidates with a qualifying job offer or PN are awarded 600 CRS points, and will be invited to apply at a subsequent draw from the pool. Draws typically occur around every two weeks, with the lowest CRS point requirement of any draw thus far having been 450. When a draw takes place, candidates with a CRS score equal to or above the requirement are issued an ITA, after which they may submit an application. Once they do so, they leave the pool. Therefore, the number of candidates with a score equal to or above the most recent CRS ‘cut-off’ point is generally relatively low, as there is a constant flow of people leaving the pool due to the submission of applications.

Take, for example, the January 3, 2016 snapshot of the pool provided by IRCC. The draw prior to this snapshot took place on December 18, 2015, and issued 1,503 ITAs to candidates with 460 or more CRS points. As we can see in the table below:

Assuming that none of these candidates withdrew their profiles or allowed them to expire over the three days before the next draw from the pool, which took place on January 6, 2016, all of the candidates with 600 or more CRS points, as well as a proportion of those in the 450 to 599 range, were issued ITAs.

The candidates remaining in the pool, many of whom had CRS scores in the 300s, were in a strong position to get into that 450+ range by promoting themselves to Canadian employers and attracting the attention of provinces that are looking for particular skill sets that may benefit the local labour market. Other candidates were well-positioned to obtain an ITA as a result of improving their human capital factors alone.

As we can see from the data extract, in addition to other information based on Express Entry draws, proactive candidates have been successful at improving their CRS score and getting that all-important ITA. 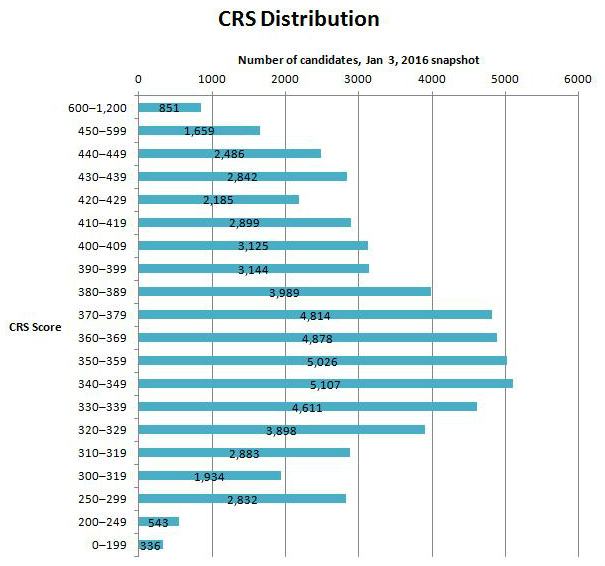 Interestingly, of the candidates in the pool in the 600 to 1,200 range on January 3, 2016, the vast majority (72.3%) had scores of between 600 and 999, meaning that the number of points allotted to them for core human capital factors alone was less than 400. Indeed, almost half of them had core human capital points of 349 or less (plus 600 for the job offer or PN). This shows that a proportion of candidates who enter the pool with low CRS scores are ultimately receiving ITAs. 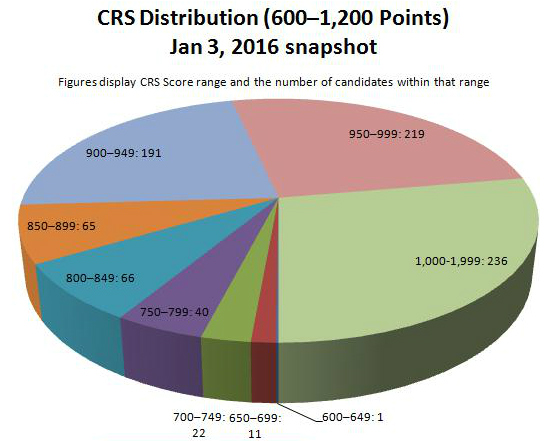 Moreover, there was a wide range of CRS scores among the candidates who received an ITA in 2015, with around 40% of them having been invited based on core human capital factors alone. The remainder had either a qualifying job offer or PN. PNP becomes a significant factor deeper into the year

Conversely, earlier draws selected a large number of CEC candidates. This was because of the high number of foreign workers with LMIA-backed job offers who wished to immigrate to Canada permanently.

Nonetheless, throughout 2015, a plurality of invited candidates (42.6%) were issued ITAs under the Federal Skilled Worker Class, which remains the most popular route to Canadian permanent residence through Express Entry. Proactive candidates are getting ITAs

“There are a couple of important takeaways from this report with respect to the Comprehensive Ranking System. First, it should be noted that the Federal Skilled Worker Class has been the most popular route through Express Entry. Second, the data extract from the pool, combined with what we already knew from the results of the draws, shows that a significant number of proactive individuals with core CRS scores in the 300s, and even lower, are ultimately receiving invitations to apply,” says Attorney David Cohen.

“The upshot of this is that it is important for individuals who are interested in immigrating to Canada and eligible to enter the Express Entry pool. If you’re not in the pool, you are effectively invisible to Canadian employers and provinces, two groups of stakeholders that are becoming more familiar with the system and selecting candidates at an increasing rate.”