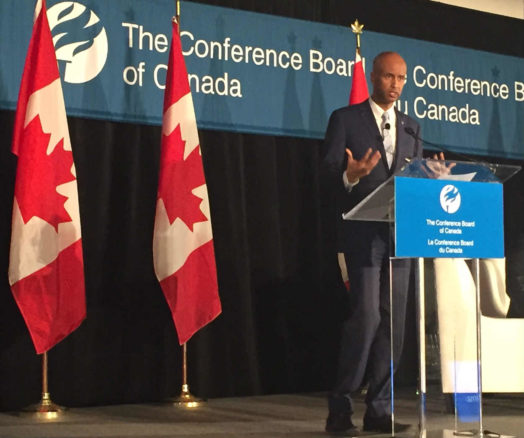 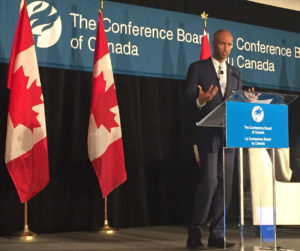 Canada is competing with other nations for international talent, and must do even more to attract and retain newcomers, says Minister of Immigration Ahmed Hussen.

Hussen made the remarks during a wide-ranging opening address on the opening day of the Conference Board of Canada’s Canadian Immigration Summit 2017: Innovating at 150 and Beyond. The summit is being held in Ottawa, just steps from the very Parliament where Canadian immigration policies are put into practice.

“Growing Canada’s population through immigration boosts economic growth and softens the economic burden of a rapidly aging population and low birth rates,” said Minister Hussen, himself an immigrant who came to Canada as a refugee at the age of 16.

“More and more countries are also using immigration as a tool for economic growth. Source countries for immigrants, such as India and China, have rapidly expanding economies, therefore creating opportunities right at home for their best young and educated citizens.

“We must ensure that the programs that we have in place in immigration will allow us to continue to win in the global race for talent . . . we have to be able to be nimble and constantly innovate, because other countries are also coming on board.”

The role of Express Entry in achieving these goals is front and centre for Immigration, Refugees and Citizenship Canada (IRCC), the department headed by Hussen, who referred to the country’s flagship economic immigration management system as “part of our toolbox, allowing us to identify the best and brightest people.”

Express Entry is now the main driver of economic immigration to Canada, with more candidates being invited to apply for permanent residence so far this year than in the whole of 2016. Moreover, IRCC is achieving its goal of inviting more candidates based on their human capital, skills, and experience, following improvements made to the system last November.

“We will continue to make improvements to Express Entry to deal with the realities of the global talent pool.” stated Hussen.

Whether this refers exclusively to the already announced changes due to come into effect on June 6, or whether it also implies other improvements that may be in the pipeline, remains to be seen. In any event, other IRCC initiatives may have a windfall gain for the Express Entry system. Minister Hussen cited the new Global Talent Stream, which falls under the government’s Global Skills Strategy, as a case in point.

This temporary work stream, due to be rolled out next month, sets a two-week processing time for the delivery of work permits for workers in certain occupations. In his speech, Hussen cited these workers as a future source of Express Entry applicants, as many of them may wish to remain in Canada permanently.

The minister also mentioned that pilot programs, if successful, may be extended and replicated across the country. The recently-launched Atlantic Immigration Pilot Program (AIPP), for example, has shown early signs of success. More than 250 employers across the Atlantic provinces have attained designated status, and IRCC expects to take in 2,000 newcomers, plus their families, through this stream each year for its initial three-year duration.

“This is the only immigration program that is completely led by employers, who get to recruit intermediate- and high-skilled workers in all the four Atlantic provinces . . . employers have been enthusiastically embracing this program,” said Hussen, who also noted that employers will be involved in the settlement process. In return, these employers are not required to obtain a Labour Market Impact Assessment (LMIA) when hiring under the AIPP.

The minister admitted his hope that by involving the employers and settlement organizations, Atlantic Canada can retain more immigrants. In contrast to Ontario and Alberta, which boast retention rates of immigrants upwards of 90 percent, only around 60 percent of newcomers to Atlantic Canada remain in their original destination province.

“The integration and settlement of newcomers is critically important, because the faster we can do that, the faster that those newcomers can get into the labour market and help us grow as a country and contribute to our common prosperity.”

The minister said that Canada is looking at international models of settlement and integration, such as the German model, which combines work and language training.

“We have to do better”

Though Mr Hussen has only been in the job since January, he has stamped his personal authority and style on the department. In doing so, he recognizes its shortcomings and potential areas for improvement.

“We have to do better,” he stated. “Putting our clients at the heart of everything we do will ensure that everything else works out. If we look at the client as being central to everything we do, processing times will become a priority for us. We will have to drop processing times across all streams of immigration. And we want every Canadian and every foreign national who navigates our website to have a pleasant experience. We don’t want them to walk away frustrated.

While making these comments, the minister made it clear that IRCC is already making progress. For example, processing times for the spousal/common-law partner sponsorship program have been slashed by more than half, to a current time of under 12 months. Renewals of Permanent Residence Cards have also been reduced from up to 18 months to just 54 days, and the department aims to get this down to 14 days.

International students were also given their due by the minister, who noted that applications to study in Canada from Indian nationals were way up year-over-year, but that Australia, a competitor country in terms of international education, has more Mexican students than Canada, even though Canada and Mexico share a hemisphere and a continent.

Canada issued 367,000 study permits in 2016, a 22 percent increase over the previous year, but there is room to welcome even more international students, according to the minister. Permanent integration of these students is also a top priority.

A contrast with the world

IRCC’s client service improvement goals are all the more pertinent given that the Liberal government — globally recognized as being pro-immigration, particularly given a global cooling of attitudes towards immigration generally — has increased immigration targets over the past two years.

This target may be increased again, though the minister did not mention a specific figure. Speaking exclusively to CICNews following his address, Hussen stated that “we have started having national consultations on next year’s immigration levels, and whatever businesses, ordinary Canadians, NGOs, and provincial governments come up with on the number, but also on the right mix, we will take a look at that. We are currently having those conversations.”

These kinds of public-private consultations on immigration may not be the norm globally, but then again Canada is a stand-out country when it comes to immigration and how it perceives integration. To drive home the point, the minister reminded the assembled audience that Canada has “citizenship based on values, not based on ethnicity or blood origin.”

To find out if you are eligible to immigrate to Canada through one of the many immigration programs, please fill out a free assessment form.

Why does Canada welcome over 400,000 immigrants per year? The three classes of immigration in Canada and their purpose.