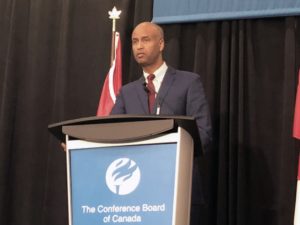 When it comes to the future of immigration to Canada, it’s no longer a question of “why immigration” but “how much,” says federal Immigration Minister, Ahmed Hussen.

“That’s where the debate is now,” he told his audience at the 2018 Canadian Immigration Summit in Ottawa.

“Without immigration, our ability to grow our economy would become an impossibility,” Hussen said, referencing a recent report by the Conference Board of Canada.

The report makes the case that an immigration rate of one per cent of Canada’s population by the year 2030 would help offset the challenges caused by an aging population and contribute one-third of Canada’s projected average annual real GDP growth rate of 1.9 per cent that year.

In 1971, Hussen said there were six working Canadians for each retiree, a ratio that had dropped to 4:1 in 2012 and could drop to 2:1 by 2036 if immigration levels aren’t increased.

“How would we maintain what we have with a ratio of 2:1,” Hussen asked, pointing to social programs like public health care and pensions as well as infrastructure.

Canada’s multi-year levels immigration plan, introduced last year, is responding to this mounting demographic challenge, he said, and will increase Canada’s immigration rate to 0.9 per cent of the Canadian population by 2020.

“Sixty per cent of this immigration will be in the economic category to fill labour market gaps as well as skills gaps,” Hussen said.

He also touted the “profound impact” brought about by changes to the federal government’s Express Entry economic immigration system introduced in late 2016 that saw the number of bonus points for a job offer reduced, among other changes.

Immigrant entrepreneurs, he added, are also helping create jobs – and the jobs of the future – in Canada.

“Some of our most creative and innovative entrepreneurs are immigrants,” he observed.

He told the story of a Cuban immigrant he met in Edmonton who had started a software company that is now one of the leading software companies in Western Canada and employs 150 people.

On the topic of entrepreneurs, Hussen said recent immigrants now surpass Canadians when it comes to self-employment and business.

“These businesses are more likely to sell their products to other countries, helping Canada to open markets for all of us beyond the United States,” he said.

To find out if you are eligible for Canadian immigration, please fill out a free assessment form.

The perils of population decline and labour shortages are on full display in Canada’s Atlantic Provinces, Hussen said, and the government is working with the region’s provincial governments to address them through the Atlantic Immigration Pilot (AIP).

Hussen said the employer-driven AIP allows employers to recruit foreign workers without the need for a Labour Market Impact Assessment in return for a settlement plan that encourages workers and their families to stay in the Atlantic Canada region.

Hussen said until Atlantic provinces start meeting their quotas under the AIP, there are no plans to revisit their annual Provincial Nominee Program allocations. Furthermore, if a province doesn’t use its quota, the other Atlantic provinces can use it.

“We gave Atlantic Canada thousands more applicants on top of their PNP numbers, and we allow those applicants to bring their family members,” he said. “Finish those numbers and then we can talk PNPs.”

A key focus in Atlantic Canada, and the rest of the country, needs to be on settlement plans that among other priorities help find schooling for kids and jobs for spouses, Hussen said.

Lessons from Atlantic pilot for other regions, including Northern Ontario

Ensuring newcomers are effectively integrated is vital not only in Atlantic Canada but across the country and Hussen said the AlP will hold valuable lessons for other regions of Canada that are also experiencing population challenges and need workers, like Northern Ontario and rural areas of the country.

“The success of our immigration will largely depend that the hundreds of thousands of newcomers who arrive each year, regardless of the program they enter under, are welcomed and integrated and absorbed and embraced by the Canadian family,” he said.

“The faster that a newcomer can be assisted to start their lives and succeed in Canada, the faster they can contribute to our society.”

Hussen concluded his remarks by calling on his audience to play their part in challenging anti-immigrant sentiments that are on the rise worldwide.

“It’s incumbent on those who are leaders and opinion leaders to not take what we have in Canada for granted, because we are not immune to this rhetoric,” he said.

“Whatever you can do in your own private spaces to push back against that narrative by fighting fear with facts would be very helpful. I’m not asking on behalf of the Government of Canada, I’m asking as a Canadian.”

To find out if you are eligible for Canadian immigration, please fill out a free assessment form.